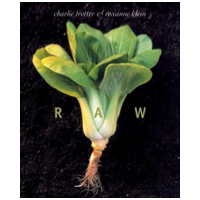 In Raw, award-winning chef Charlie Trotter elevates the flavors and complexity of raw fruits and vegetables, using basic techniques such as juicing, dehydrating, and blending. Visionary chefs Charlie Trotter and Roxanne Klein pay the ultimate tribute to the culinary heights that raw food can scale. Each recipe is complemented by a detailed wine pairing, conceived to heighten the tastes, textures, and aromas of the ensemble. Juices, a natural extension of the raw-food repertoire, are also featured in such soothing preparations as Red Roxie, Prickly Pear and Pomegranate, and Cucumber-Lime Water. In such skilled hands, raw food is nothing short of a revolution in the the way we cook and eat.